To read the first part of Emma’s story about her daughter, Phoebe, click here.

It is now April 2021 and I recently contacted Elle to ask to continue this piece of writing and the next chapter in our lives. 2020 was a year that no one will forget and for us one that gave us another member of the family. Harry. This is his story…

It begins in June 2020, when, after restrictions in clinics were lifted, my husband and I embarked on another round of IVF. This two week cycle of self-administering injections, having blood test and scans was all too familiar but we began with full hearts and belief this would be the time we would bring our baby home with us. We had two embryos ‘put back’ and waited. The day of our pregnancy test was a whirlwind. There were two lines. We were pregnant.  There was happiness of course but fear and anxiety were the overwhelming emotions we felt. What would the next 9 months look like?  I was scared but hopeful, positive yet realistic.

At around 5 weeks pregnant I developed severe OHSS (ovarian hyper stimulation syndrome). Very rarely in IVF after egg collection, your ovaries can swell and release fluid that travels up into your abdomen. The pain was so severe and I was carrying around an extra 35kg in fluid. I could barely walk and my breathing was severely restricted due to the fluid in my chest that one afternoon we called an ambulance. There was no way the baby would be able to survive this, I thought. I couldn’t eat or drink, was vomiting and once in hospital, we discovered one lung had virtually collapsed being so full of fluid and the other was working at just 20%. I had numerous scans and was on morphine and oxygen, but because of the pregnancy they couldn’t perform a chest drain and it was a case of waiting for the fluid to disperse around my body and back into my blood stream. I couldn’t have a scan yet to check on the pregnancy as it was too early, so we just had to wait. Due to Covid restrictions no visitors were allowed and I have never felt so scared. For six days I struggled to even stand up, breathing felt like I was taking a breath through thick tar. Taking more than 2 steps made me collapse and we waited… The fluid did slowly begin to disperse, and I was finally let home armed with oral morphine and other drugs to keep the pain at bay. My only concern though, was for the baby.

We waited a few days and then went for the 6 week viability scan. On the screen were two tiny dots, with flashing heartbeats. We were having twins. I don’t think either one of us could believe it. However, less than 24 hours later I woke to extremely heavy bleeding. This was happening again, I was going to lose these babies. We rushed down to the hospital where the early pregnancy unit scanned us. After what felt like forever, they looked over with those words I have heard all too often now, they almost seem normal. “I’m sorry, you’re currently miscarrying one of your babies.” Unbelievably the other baby was doing okay, but it would be another week or so until we would find out if we would also lose that baby. We were told to go home and I was to have complete bed rest. We thought of the baby we had lost and how for all but a brief moment they had existed. The next few weeks were a blur. Our baby was okay, but I was continuing to bleed daily. The doctors said everything looked ok and that the continued bleeding was because of the miscarriage. Another scan at 8 weeks, and the baby was doing well; right size, strong heartbeat. I was so in love with this little person and vowed to do all I could to help bring it home to us.

I unfortunately developed Hyperemesis Gravidarum, which is severe morning sickness. I was being ill around eight times a day, and couldn’t keep any food or drink down. My body was exhausted. I genuinely couldn’t see a way through this. There were discussions with the hospital about admitting me for fluid drips, but because of Covid they were trying to keep footfall in the hospital to a minimum. The sickness became a part of my daily life. I didn’t really care what I was going through my only concern was for my baby.  My consultant was amazing and offered continued support. After a meeting with her and given my history she suggested she put in a cervical stitch, which would hopefully prevent a premature labour and would give me the best chance to getting our baby past the 24 week mark.

The day after we decided this was for the best, the procedure was carried out. I arrived at the hospital and was soon taken into theatre. I had a spinal block, so I was numb from the waist down and the doctor completed the stitch. They scanned the baby afterwards and all was ok. I spent the day in the hospital, as I had some bleeding, but we were sent home later that night. I was 15-weeks pregnant. Once home, and on strict bed rest, I sat and waited. My experience of pregnancy has never been positive, but I kept telling myself this would all be ok. Then three days after the stitch had been put in, I began experiencing severe pain. We rang the hospital who asked us to come straight down. Again, another scan showed the baby was okay. I watched them on the screen, flipping around, seemingly without a care in the world. They said I had a urine infection and put me on anti-biotics. Again we were sent home, but less than 24 hours later, I woke in the night crippled in a pain that I cannot even begin to explain. I was screaming in agony, and when we called the hospital they told us to come straight in. The car ride was horrific. I have never felt pain like it, and I almost passed out from it. When we arrived at 3am, I almost collapsed out of the car. There was blood everywhere and midwives ran out with a wheelchair. I was hysterical with a mixture of pain, worry and total terror about what was happening. My poor husband had to just watch as I was rushed upstairs to labour ward.

I was injected with some pain management medication and then we were told. “I’m so sorry Emma, you are going to deliver your baby tonight.” The earth shattering sound that came out of my body is one that I don’t think I could replicate. My husband’s cries I don’t ever want to have to relive. They began to prep me for theatre because of my stitch and suddenly I felt an almighty surge and our baby was born. “You have had a little boy.” They put him on me and he was tiny but perfect. He had ripped through my stitch and they had to rush me into theatre because of the blood loss. I was wheeled out with Steve sat there alone cradling our little boy. The midwife that was with us was also there when we had Phoebe. She shed a tear and held my hand. Her disbelief was echoed by everyone. Having contractions with a cervix that had been stitched up had been causing the pain I was having. I was given another spinal, and for the next two and a half hours they tried to stem the bleeding. I was extremely unwell,  and I was genuinely scared I wouldn’t come out of the theatre. I had to have blood transfusions due to losing pints of blood and was also given adrenaline as my heartrate and blood pressure dropped dramatically. I was wheeled out and taken to Room 1. Room 1 was where I had delivered Phoebe just eighteen months earlier. They had taken out anything that might make it look like a delivery room, but I needed to be in that room as it was closest to the theatre and they were worried I would need to go back in. Steve was sat there with our baby, pale and withdrawn, looking totally broken. I was in a daze and couldn’t even speak. The next few hours were a blur. There was our beautiful little boy, Harry Nicholas, lying in a crib. He was so small but so perfect. Once again we would not be bringing our baby home.

After about ten hours, we were taken to the Daffodil Suite. Slightly away from the active labour ward, it looked more like a cosy hotel room. Adorned with yellow paint on the walls, candles and flowers to welcome parents who have had to say a premature goodbye to their babies. I sat with Harry, held him and told him how sorry I was that I couldn’t protect and look after him. I’m not afraid to say in that moment I didn’t want to be here anymore. I couldn’t conceive a world where yet another of my babies had been lost. We spent the next 24 hours with him in a cold cot that they provided. We held him, kissed him and told him all about his big sister, Phoebe and how loved and wanted he was. And then we came home. Empty.

In the weeks that followed we were told I had developed an infection which is why he was born early. I was told “You were incredibly unlucky.” That felt like the grossest understatement possible.

Harry was born during a global pandemic,  and I often feel he’s been a bit lost in the world because of Covid. I couldn’t see friends after I had him, so don’t feel I’ve ever had the chance to properly tell his story. Like his big sister and those babies who we never got to meet, he existed and he was here, if just for a split moment.

We’ve just passed what would have been his due date, and how I wish things were different. My husband and I talk about the type of boy he might have been, and what life might have looked like had we had him, and Phoebe, home with us. Life somewhat passes me by. I so want to be a part of it but, for now, I’m still slowly putting together the pieces of yet another Ioss.  Harry was cremated and now sits beside Phoebe in an urn next to my bed.

I kiss the tops of these every night and every morning, and will do so until there is no more breath in me.

I will share my children’s story throughout my life and I want to thank you for reading Harry’s chapter. 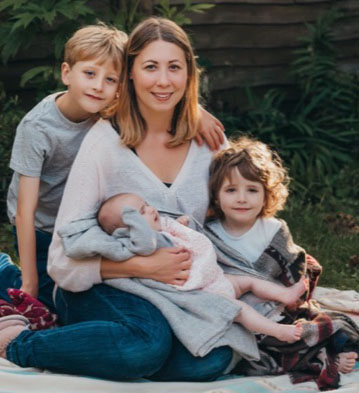 Elle Wright is a wife, mother, author and blogger. After the death of her son, Teddy, at three days old, Elle started writing to navigate her new life and as a way to feel purpose again. Her Feathering The Empty Nest blog is a way of finding light in darkness, positivity in times of desperation and, hopefully, making a few people laugh along the way.

Alice Eira; Our Sparkling Winter Snowfall Who Taught Us So Much About Happiness~ Guest post by Cerys

One from two weeks ago, because it makes me feel h

I’ve got that Friday feeling and this sunshine i

Gearing up for a wild one here…. If wild means s