This Is My Brave Face- Mum’s Voice Guest Post

There’s one and there’s the other

“There’s one, and there’s the other…”, the sonographer calmly announced.

Oh my goodness. Twins. I was having twins. After experiencing a bleed at 11 weeks pregnant I thought I was suffering from a miscarriage however I was just getting bigger, twice as fast. My crying changed to laughing and then I didn’t know whether to laugh or cry so went a bit hysterical. Connor, on the other hand didn’t talk. In fact, he didn’t say much for the next two days apart from “twins Amy” in disbelief.

Although I struggled with the pain of my body growing twice as fast, I loved my forever growing bump and the nervous excitement that we were expecting twin girls. By 21 weeks the nausea had finally lifted and at long last I had the ‘pregnancy glow’.

On Thursday 23rdJune 2016, I struggled to wake up. My body felt so exhausted. At 9am, I was jolted awake by a sudden feeling I had wet myself. I lifted up the quilt and the sheets were covered in blood. My waters had gone. I was only 24 weeks pregnant.

At Harrogate District Hospital, it was confirmed that Twin 1 was without her waters. As they only took babies from 32 weeks gestation, we were lucky to find out that Leeds General Infirmary had two available incubators.

Due to both Twins being breach, Twin 1 standing on her cord and the added risk of a prolapsed cord, the antenatal ward became my new home. For the next seventeen days, I managed to keep my girls inside of me. I would constantly count down on my fingers how many days it was until I was another week pregnant. I often looked at all the mums arriving on the ward with their full term bumps and think how lucky they were. What I would have done to be in their shoes. I watched and listened in wonder at them arriving with their car seats, hospital bags, birthing balls and cries of pain as they went into labour.

On Saturday 9thJuly, I started to experience niggling period-like pains and that night, found it difficult sleeping. Things were beginning to feel different. I knew deep down that this was the beginning of labour.

At 26 weeks plus 6 days pregnant, I caught an infection and went into early labour. I was moved to the delivery suite and later that evening Twin 1’s heart rate fell dramatically. I was rushed in for an emergency caesarean.

At 21:27, Twin 1, Charlotte, was born and at 21:30, Twin 2, Esme, was born. I remember the anaesthetist congratulating us on the arrival of our girls. It felt so strange to hear the word ‘congratulations’. It didn’t feel right. They were supposed to be born and then straight into my arms. My arms, where I could hold them, kiss them, whisper that I loved them. I couldn’t do any of that. They were busy; busy fighting for their lives.

At 11pm the Neonatal Registrar came to see us in the delivery suite. He explained that Esme was stable and doing well but they were struggling to ventilate Charlotte. He clarified that she might not make it. My world stood still. I couldn’t move and just stared into space.

An hour later the Neonatal Consultant arrived and announced that Charlotte was stable. I cried the happiest, most relieved tears I had ever cried. I was so proud of my little girl, she was incredible.

We were given the go ahead to go and see our girls. Connor wheeled me from one incubator to the other. I couldn’t say much. Words seemed to get stuck. I wanted to be this strong mother I imagined myself to be but I couldn’t. I couldn’t even bring myself to say I loved them out loud. I felt ashamed. What mother couldn’t tell their new born babies they loved them? I did though. I loved them both with all my heart. I gazed into each incubator with overwhelming love. Despite having so many tubes and their faces covered, they were the most beautiful babies I had ever seen. They were mine. I felt so lucky to have met them and to be able to call them my daughters. I was their mother.

Life on the neonatal unit

Nobody could have prepared me for my journey into motherhood. There I was, a new mother, yet I was attached to breast pumps and spent my nights cuddling ‘fleece buddy blankets’ instead of my babies. I couldn’t protect, hold, hear, kiss, feed or even dress my babies. Was this how motherhood was supposed to be? Above all, the feeling that upset me the most was that I didn’t feel like a real Mummy. I didn’t feel like the Mum I so desperately wanted to be.

When the girls were a few weeks old and we were no longer living by the hour, I began to relax into my new role as a Mother. I had my little routine and found ‘Mummy jobs’ to do. It makes me smile how I refer to it as ‘Mummy jobs’ because for many weeks there was the strange feeling of being a visitor. I spent my days talking to the nurses, having skin to skin contact (if they were well enough), comfort holding, doing their cares and making several trips to the expressing room.

I held Esme when she was three days old and Charlotte when she was eight days old. Unfortunately they were always too poorly for it to be possible to hold them both at the same time. I didn’t mind this too much as I imagined I would have plenty of time for this when I got them home. During the hours I held them, I would forget how critically ill they were.

One of my main ‘jobs’ was to feed the girls. The thought of stopping expressing, even through the hardest of times, never crossed my mind. By 6 weeks, one of the ward sisters laughed and said I had expressed enough milk to feed half of Yorkshire. I ended up donating all of my breast milk.

One of the toughest parts of my day was leaving Charlotte and Esme and walking out of the intensive care door. Every time I left, I felt like my maternal instinct and mother nature would start screaming at me. When I was away from the neonatal ward, the fear intensified and panic often settled in.

The hardest days in hospital were spent living in fear of the unknown, staying strong and continuing to put one heavy foot in front of the other. Between Charlotte and Esme, they faced many premature baby problems. At ten days old we found out that Charlotte had had a large bleed to her brain. A few days later Esme was fighting for her life due to catching an infection and both her lungs collapsing. Charlotte then caught the infection and her lungs collapsed too. Those days my life became a living nightmare and I had to face my fears as they hurtled towards me from every angle. During the times they were stable for a few days, it was hard to not wonder how long it would be before one or both became poorly again and we would be informed of more devastating news.

At six weeks old, we found out Esme had caught another infection. A cold fear swept over me. I saw the look in Esme’s eyes, her change in skin colour, her lack of movement. Sights that were all too familiar; sights which I had never wished to see again, but this time seemed different. Deep down I knew something wasn’t right. I felt it in my heart.

Sadly at seven weeks, Esme lost her fight due to her extreme prematurity, septicaemia and ventriculitis.

After giving birth to Esme, holding her and being her mother, my knowledge of love became stronger. However it was only upon understanding the pain of knowing the kindest thing to do for her, was to let her go, did I truly understand the meaning of love.

Before we took Esme off her ventilation, I had one last question. “Would she be able to meet her twin sister?”

Even though I knew we were saying goodbye to Esme very soon, the moment I held both girls together, my life finally felt complete, my heart felt whole and my arms felt full. Today I feel grateful for that opportunity.

Each day, Charlotte continued to grow stronger. She never failed to put a smile on my face. As I longed for Esme with a shattering heart, Charlotte delicately picked up the falling pieces.

On the 10th October, on Charlotte’s due date, we went home. It was a  day which for many months had been a distant dream. As we left the neonatal unit, my heart burst with pride. We had made it.

My girls taught me that when everything is stripped back you learn what actually matters: love, peace and hope. I am forever grateful that Charlotte and Esme taught me these three things in their purest form.

Charlotte and Esme were our little Campbellinas.

In memory of Esme and the amazing support we received from the Leeds Neonatal team we set up a non-profitable organisation called ‘Campbellinas’. It has been set up to raise money to help support neonatal units.

This Is My Brave Face

My blog is about learning who I truly am, when my most feared nightmares became my reality.

I have been lucky that I have Charlotte. My amazing girl who makes me smile, who makes me feel alive and who, each day inspires me to put one foot in front of the other. My blog shares the story of my girls, giving birth to premature twins, surviving the neonatal ward, losing my baby, being a mummy to a surviving twin and how I am surviving my current pregnancy.

I hope that by opening my heart I can raise awareness of prematurity, reach out to those who have been on a similar journey, help to support others who may be currently facing adversity and help to break the silence surrounding baby loss.

The Legacy of Leo- Mum's Voice Guest Post by Jess 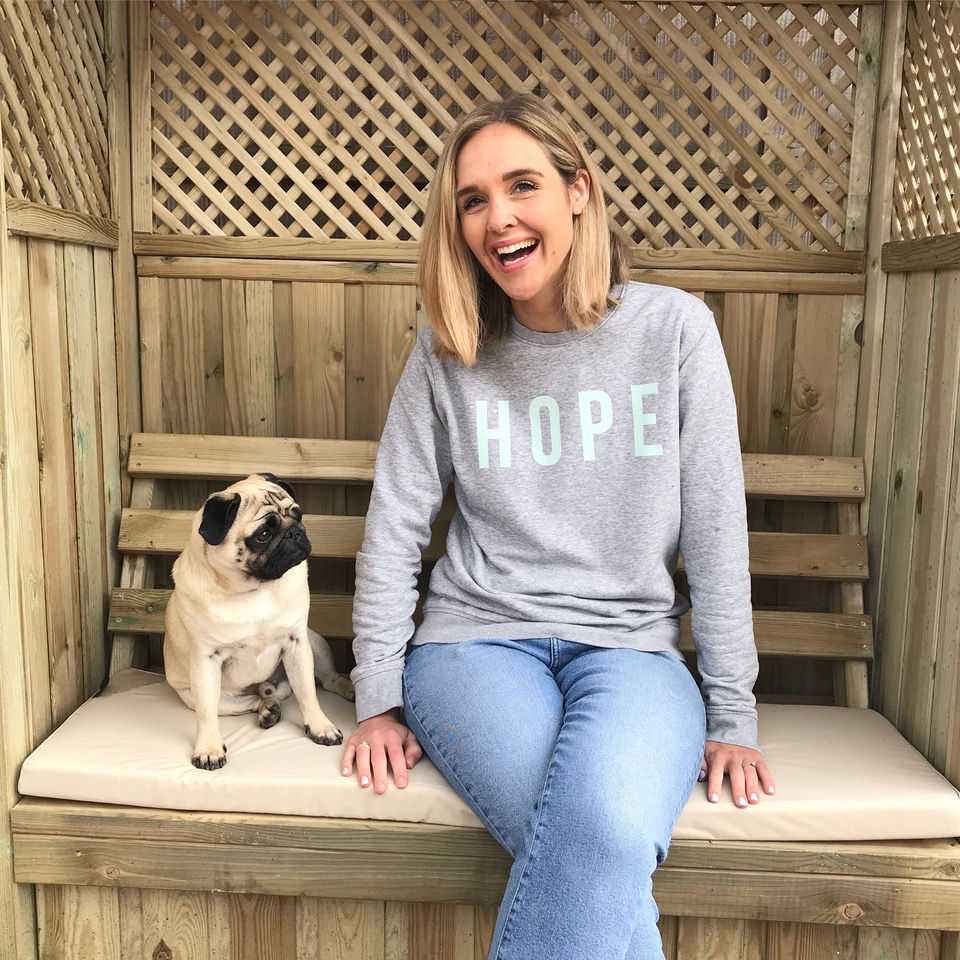 The Problem With Waiting- Guest post by Lara Jo

AD/ GIVEAWAY🐣 | Getting the kettle on this East

Thought I might as well *try* and get in the spiri

My Mum sent me this card in the post today, and it

Starting to think there’s only so much baking on

Wants to say something poignant or meaningful abou